The Citizens Statewide Lake Assessment Program (CSLAP) is a volunteer lake monitoring program conducted by the NYS Department of Environmental Conservation (NYSDEC) and the NYS Federation of Lake Associations (NYSFOLA). Founded in 1986 with 25 pilot lakes, the program has involved more than 200 lakes, ponds, and reservoirs and 1000 volunteers from Eastern Long Island to the Northern Adirondacks to the western-most lake in New York and from 10 acre ponds to several Finger Lakes, Lake Ontario, Lake George, and lakes within state parks. In this program, lay volunteers are trained by the New York State Department of Environmental Conservation (NYSDEC) and the New York State Federation of Lake Associations (NYSFOLA) to collect water samples, observations, and perception data every other week in a fifteen-week interval between May and October. Water samples are analyzed by a certified laboratory. Analytical results are interpreted by the NYSDEC and FOLA, and are utilized for a variety of purposes by the State of New York, local governments, researchers, and, most importantly, participating lake associations.

How is SLA involved? 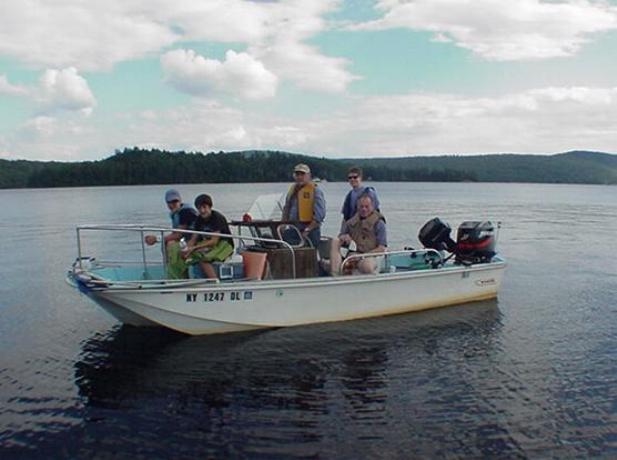 The Schroon Lake Association participated in this program for five years from 1987 until 1991 when the program was discontinued for a time. Testing was resumed again in 2001 and continues through the present. From 2002 to 2007 the tests were conducted by Ms. Cookie Barker, science teacher at Schroon Lake Central School, and a few of her students as a summer science project. Currently these tests are performed at two locations, one in the north basin and one in the south basin. Schroon Lake Association volunteers perform testing at the northern site and our sister lake association conducts the tests at the southern site. Reports are issued annually by the Department of Environmental Conservation. These reports can be downloaded from the internet. Let us know if you are interested in assisting with the collection of these water samples. Volunteers are welcomed!

In the photo above: SLCS students Ethan Tyrrell and Taylor Gath are sitting in the bow of the boat. Jim Hamilton is driving, and Dr. Frost is seated with Ms. Barker standing behind him. In the photo to the left: In the background, Jim Hamilton, who volunteered his boat for the purpose of these studies, and Leanna Karp, one of the Schroon Lake Central School students involved with CSLAP. In the foreground are Cookie Barker and former SLA President Dr. David Frost. Dr. Frost is presenting Ms. Barker with a Certificate of Appreciation for her (and her students'!) hard work.

The following students showed an early interest in the preservation of the lake by working with Ms. Barker and the SLA over the years with the CSLAP program:

Our current team members are generally Chuck Harste and Peter White in the North Basin, and Glen Repko and Neil Chippendale in the South Basin. In 2019, East Shore Schroon Lake Association (ESSLA) rejoined the CSLAP program and is handling half of the samplings.